When an emf (voltage) is generated by a change in magnetic flux according to Faraday’s Law, the polarity of the induced voltage is such that it produces or generates amperage (Amps) whose magnetic field opposes the change which produces it. The induced magnetic field inside any loop of wire always acts to keep the magnetic flux in the loop constant.

Lenz law states that generated amperage (Amps) always tends to oppose the cause which produced it.  So in order to do work against an opposing force,

In other words, Lenz’s Electro-Magnetic Circuits and Conservation of Energy Law states that when a voltage (electromotive force - emf) is generated by a change in magnetic flux according to Faraday's Law, the polarity (+/-) of the induced voltage is such, that it generates an electric amperage (Amps) that's magnetic field opposes the change that generated it which obeys the conservation of energy law.” 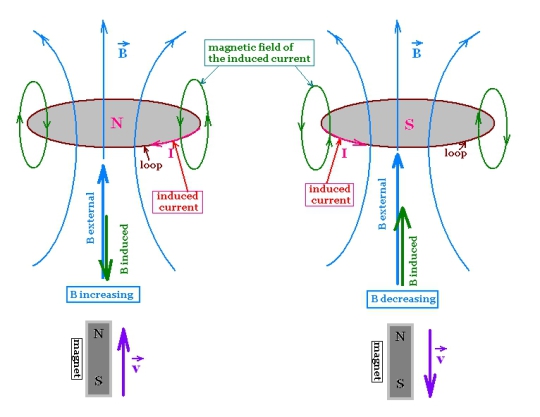