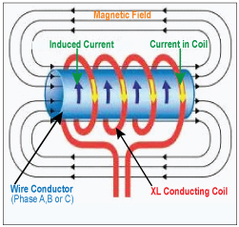 Faraday's law of induction is a basic law of electromagnetism that predicts how a magnetic field will interact with an electric circuit to produce an electromotive force(EMF) which is the phenomenon called Electro-Magnetic Induction (EMI).

EMI is the fundamental operating principle of XL technology as well as transformers, inductors and many types of motors, generators, solenoids and more. It serves as a succinct summary of the ways Voltage (or emf) can be generated by a changing magnetic environment. The induced emf in a coil is equal to the negative of the rate of change of magnetic flux times the number of turns in the coil. It involves the interaction of charge with magnetic field.

Faraday's Law states that the induced electromotive force (emf) in a closed circuit is equal to the time rate of change of the magnetic flux through the circuit.  There are several different ways to generate current (Amps) using Electro-Magnetic Induction (EMI). For example:

Electromagnetic induction occurs when a circuit with an alternating current AC flowing through it generates current in another circuit simply by being placed nearby.

An alternating current is the kind of electricity flowing through power lines and home wiring, as opposed to a direct current, which we get from batteries.

How does one circuit induce or generate a current in another circuit without touching it, and what does any of this have to do with magnetism?

Before answering this question, consider the some of the otehr basic principles that link Magnetism and Electricity:

Thus, in the case of Electro-Magnetic Induction (EMI), placing a conductor in the magnetic field surrounding the first current generates the second current which is how XL technology works in terms of power generation, XL Power Conditioning happens differently.

Induction is also the principle that makes electric motors, generators and transformers possible, as well as items closer to home such as rechargeable electric toothbrushes and wireless communication devices.